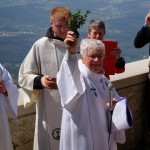 The association of “The Friends of Sainte-Victoire” gave a significant value to the traditionally known pilgrimage of Sainte-Victoire, Le Roumavagi De Santo Venturi in Provencal, which takes place every year on the last Sunday of April on Mount Sainte-Victoire. After a beautiful celebration of the Eucharist, there was a blessing of the mountain which followed by a picnic and entertainment of different sorts, including dance, songs in Provencal, an act of rescue in mountain accidents, put up by the brigades, and many other activities. Read more 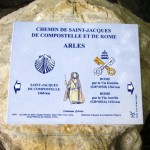 Way to Santiago and Rome

The house of the Oblates in Aix-en-Provence is located along the ancient Via Aurelia which the way today for the pilgrims from either Saint-James de Compostela or Rome. Oblates are faithful to the principle: whoever welcomes a stranger, it is God that welcomes, offer accommodation to pilgrims. Read more 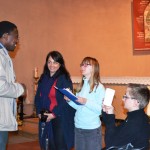 A catechises on the life of St. Eugene is an initiative of the pastoral team of Gardanne, a parish in the diocese of Aix and Arles. During this catechesis a number of children, youth and adults followed a presentation on the life of the Founder of the Oblates. They then participated in different workshops related to the theme. Read more 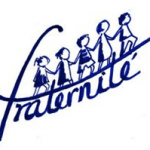 On March 12, 2015, the group of “Veilleurs de la fraternité” under the patronage of the Oblate Missionaries invited the parishes from the city centre and numerous associations from Aix-en-Provence, in order to exchange ideas and information regarding diaconie. Read more 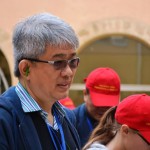 Did Saint Eugene de Mazenod ever think that one day Hong Kong pupils would come to pray in Aix-en-Provence where he founded his Congregation or they would come to Marseille where he was bishop for nearly 30 years? Did he ever dream of schools run by the Oblates in the big city of Hong Kong, whose name means « Fragrant harbour »? Read more