« A saint crosses our path » was the title of a text written by a parishioner of Fuveau on the eve of the canonisation of Saitn Eugene De Mazenod on the 3rd of December 1995. This text was again published in the monthly newsletter of the pastoral Unity, Etoile Saint-Michel, on the 1 st of March 2015. A plaque commemorating the bicentenary of the vocation of Fr. Marius SUZANNE who hails from Fuveau will be placed in the church of this town in 2016. 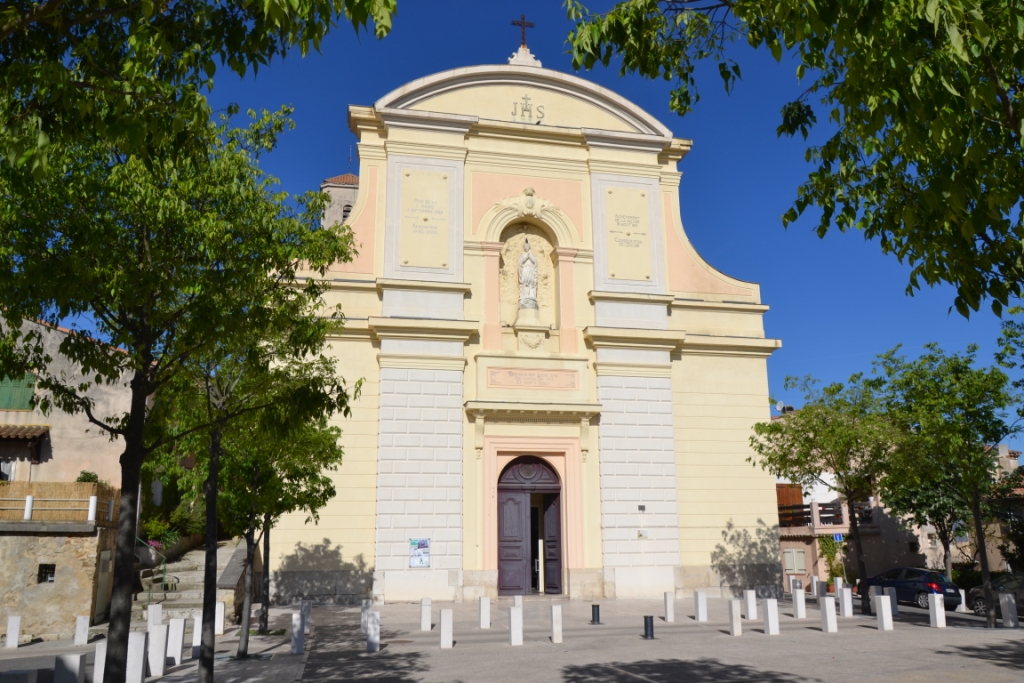 The parish church of Saint-Michel in Fuveau

This is the text of the above mentioned article: “ It will be 184 years, four months and two days since Bishop de Mazenod, Superior of the Missionaries of Provence, who will be canonised in Rome by Pope John Paul II, came to Fuveau for the first time. He was accompanied by three of his disciples: Fr. TEMPIER, Fr. MIE, and Fr. DEBLIEU. He came right to us thanks to an invitation by the then parish priest, Pierre Mitre Bernard CHABERT, for Mission evangelisation in our parish. It was the second time the Missionaries of Provence came to preach.

On that day, the 1st of September 1816, these missionaries arrived in Aix at 6 pm. They were personally welcomed by the people of the parish and immediately taken to the church. The reception, without any doubt, was held at the entrance of what is today known as the Street of the North situated after the bridge which was the unique road to access Fuveau from the North. On that same day, the Superior gave the opening speech and spelled out the programme for daily exercises. On the very same evening, the Missionaries started visiting the inhabitants of the town: all the families in Fuveau were visit each in the month-long mission (Fuveau had a population of 1200).

Four processions were held in the town: the first was the opening of the mission which took place on the 1st Sunday of September; the second which was tagged penitence, on the 2nd Sunday; the third was tagged the Holy Sacrament, on the 3rd Sunday; and the fourth processions was that of the Cross and the rounding up of the Mission on the 4th Sunday.

The municipal administration helped in the plantation of the Cross with great help coming from the people; Mr. CASSAGNE, health officer of Aix and owner of a property in Fuveau being the mayor and Mr. Hilaire DEPOUSIER was his assistant.

These are facts! But two hundred years after, we are having difficulty to imagine what the Fuveau of the 18th century was like: the present church was not yet built. Ceremonies then used to be held in the medieval church which had to be enlarged several times. 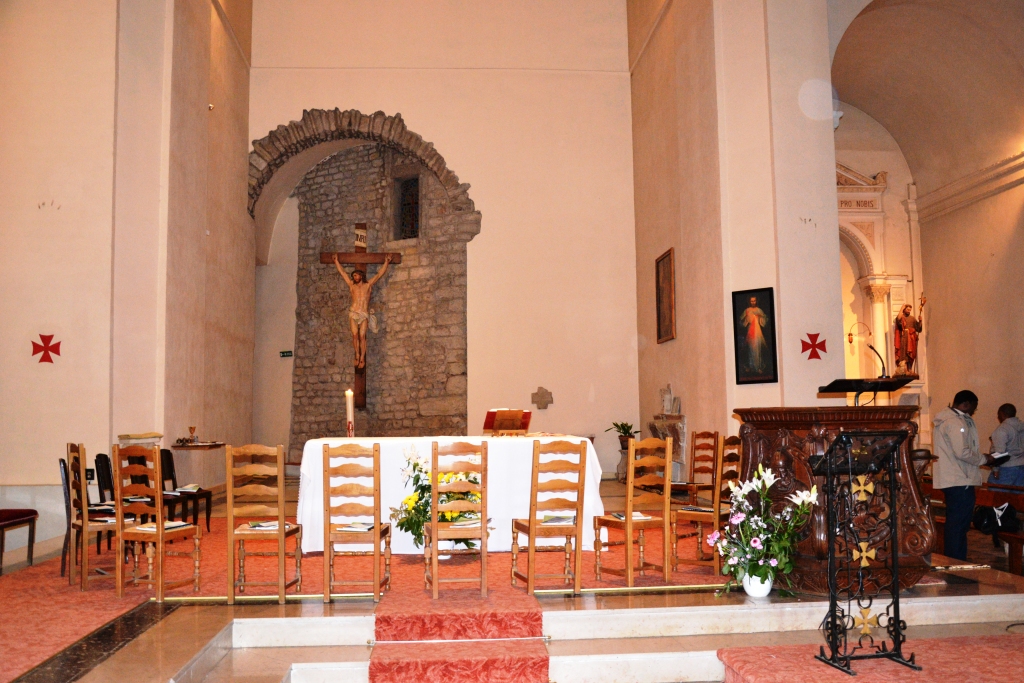 The remains of the medieval wall

In order not to disturb the work of the “charbonniers” (coalers) et the peasants, ceremonies were held very early in the mornings, and very late in the evenings.

All the ceremonies were held with the help of candle lights and oil lamps.

The church was always opened at 3:30 am. People would come around singing canticles and praises at the end of which they listened to the Word of God before going each to his working place. History did tell us that the missionaries, preoccupied with visits to families, processions and Divine Offices, could only sleep for three hours in a day. Homilies etc were said in Provencale which was the popular language.

Of this mission, we can retain the following: Blasphemy was extirpated; curses were banished in coal mines. During the visit to the cemetery, after a service was conducted for the souls in purgatory, the Superior gave a very moving speech standing in front of an opened ground (hole) on the shared end of man; this made so many a face teary, and led to the conversion of many. Everything came to an end with a plea for forgiveness before the Blessed Sacrament.

On the final day of the Mission, the church couldn’t accommodate the immense crowd that turned out; for this reason, an altar was erected in the garden.

After the Vespers, the people marched in procession towards the place where the Cross in metal was going to be planted. 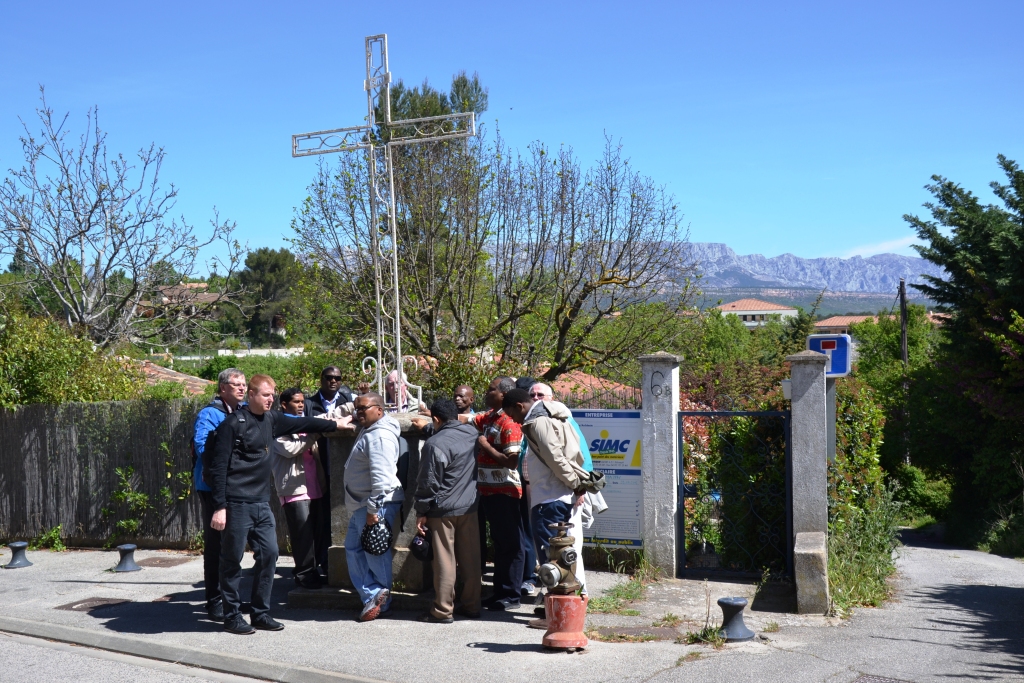 The cross of the mission

A deliberative session of the Municipal Council in 1816 and on the first day of September says: « The last days of these pious work, the 29th of September, we processionally exalt the metal cross which was kept at the Pont du Fosse square, also called La Leque; immediately, we begin to walk on the path that leads to the industry of water for life of M. ARNAUD. On everything that was said here above, we found it important to mention for the sake of history in the communal archive”.

Time passed by; in 1822, Bishop de MAZENOD was yet again in our vicinity certainly invited by the successor of M. CHABERT, the parish priest of EMERIC, an ex-priest of the refractarians whose austerity, exaggerated rigours did not yield positive results on his people who protested. Feeling misunderstood, he abandoned parish ministry and dedicated himself to preaching.

The documents consulted however did not speak of a mission, but rather spoke of a retreat. Bishop de MAZENOD was accompanied by Frs. Jean Baptist, Andre Pascal HONORAT, originally from Aix, and Jacques Antoine SUZANNE, a son of Fuveau. When the missionaries arrived, the parish priest had already left definitively: the parish was left without a priest and Fr. de MAZENOD transitionally took charge of it, but really exercising the function of a parish priest for the months of September and October.

All the catholic (official) acts: baptism, funerals, celebration of marriages (their validations), were all written and signes by one or many missionaries. Those acts were from the 1st of September to the 21st of October 1822.

After having written briefly these facts of our local history, we wish that our new saint may be honored in recognition of his work in the commune of Fuveau.