“My wife and I were privileged this month to be pilgrims following the footsteps of St. Eugene de Mazenod on this bicentenary of the founding of the Oblates of Mary Immaculate. We visited places, important to the Oblates, in Paris, Aix-en-Provence and Marseille, places significant in the life of St. Eugene”. 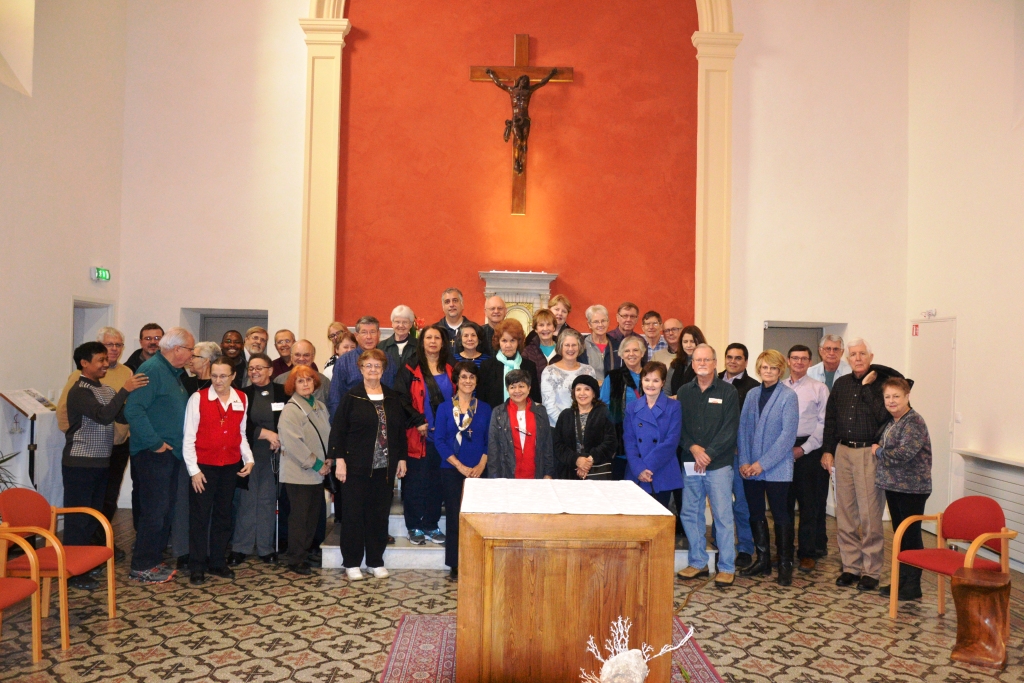 In the Chapel of First Vows

David and Ana were married in 1977 at St. Brigid’s Catholic Church in San Antonio, Texas. Both Ana and David are members of San Antonio chapter of Oblate Associates, they recently participated, with 37 other members, in a pilgrimage in Aix “on the footsteps of St. Eugene”. They were accompanied by Fr. Frank SANTUCCI, David KALERT and Art FLORES. In this article they share with us their amazing experience of the pilgrimage.

Ana has always been interested in serving the poor in both her professional and private life. She is a full-time professor of Law at St. Mary’s University School of Law in San Antonio, Texas. For many years she managed the clinical education program for law students, a program that provides free legal services. Additionally, she is chairperson of the board for Mexican American Catholic College in San Antonio which provides undergraduate education particularly to seminarians and others who seek to minister to Spanish speaking population. On the other hand, David worked many years for the State of Texas. Since retirement he has been attending the Oblate School of Theology, first, in the Master of Theology program (he received his MA in May 2013) and now he attends OST taking one class each semester for fun. 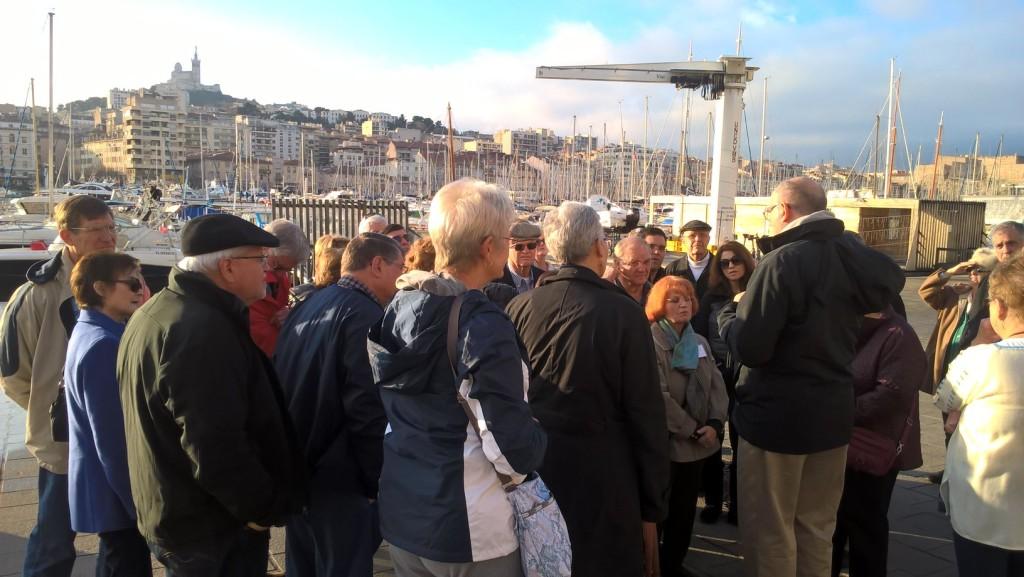 According to David, “the highpoint of the pilgrimage was our visit to the OMI foundation house in Aix. We were warmly received by the Oblates residing in the house and truly made to feel welcome and at home. We were blessed to be able to spend a few days residing in the house where St. Eugene founded the Congregation. The rooms are lovely, kept warm this winter and the communal dining with the Oblates and comradery we developed with them was truly a blessing. We were honored and privileged to share in the life of the community, eating with the Oblates and participating in their prayer life at Vespers and Oraison in the evening”.

Ana shares in David’s sentiments, “I join in everything that David said about the pilgrimage, about our Oblate hosts, and the warmth we shared with our group. I add that in those few days St. Eugene has become a dear friend. My introduction to him began on arrival in Aix: our lives were very different and yet similar enough for me to seek him out and to feel comfortable with him”.

Ana finds herself in St. Eugene who grew up in an aristocratic family, being a spoiled young man and later as priest chose to be the priest for the poor, she tells us, “my youth was not as privileged, but close enough, and clearly spoiled. As a priest St. Eugene dedicated his life to serving the poor, I have been committed to social justice and practiced the option for the poor my whole life; of course my work is not as intense, personal, or committed as his”.

As for Ana, “Aix itself looked familiar, maybe a little bit like Mexico City. We entered the foundation house at the back, a large metal door hid the interior, and opened to a parking area. From there we entered the house, it was familiar, expected, especially the floors, the walls, the halls between the rooms and the garden. I felt at home, physically and spiritually. The Oblate priests were kind, welcoming and generous. The chapel was new, different, but prayerful and holy”. 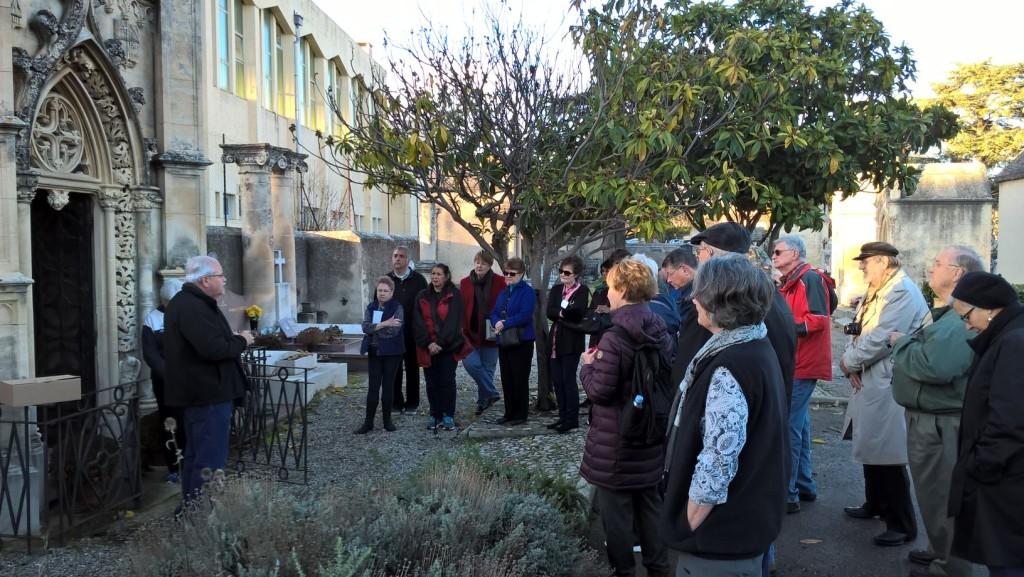 the cemetery Saint -Pierre in front of the Oblate’s vault

Ana was particularly struck by the stories about the Founder’s life, how strong and determined St. Eugene was: “he was formidable, as well as large. And yet, when the Holy Spirit led him to a path he had not intended or planned (mission, founder, bishop . . .) he followed with characteristic strength and love for the poor and marginalized. I heard these stories a little bit, but felt them a lot. I was not surprised, and I had expected to make friends”.

On the other hand, for David the apex of the experience, “was a directed meditation in the room where St. Eugene lived with the priests who were to establish the order with him. We felt his spirit and the zeal he felt for evangelizing the poor and those at the margins of society. The Charism of the OMI which is so carefully carried out by the many brothers who call themselves Oblates was palpable in the room. We were privileged to pray and feel that spirit while touching the relic of the saint’s heart. Many in our group left the room weeping”.

“On this pilgrimage we learned a lot about St. Eugene, and the history of the Oblates. We will always be connected to St. Eugene, to the upper rooms of the Foundation House, to Aix, from which the work and spirit of the Oblates flow. The Oblates of Mary Immaculate shared their home with us, and now it is in a way our home as well. We pray that this bicentenary year will yield great fruit for the Oblates and all they minister to”.